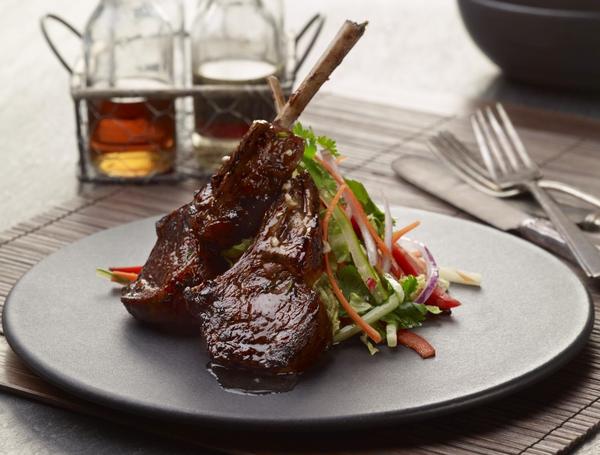 For the Crispy Asian Slaw

For the Asian dressing

1. In a large bowl, combine the brown sugar, tamarind paste, lime juice and zest, cilantro, chile, vegetable oil, Worcestershire sauce, salt, and pepper and mix well. Cut the lamb rack into individual chops and place them in a shallow non-metallic dish. Rub the marinade into the cutlets, coating them well on both sides. Cover and refrigerate for up to four hours.

3. Preheat a large skillet over high heat. Cook the marinated lamb chops in the skillet for two minutes on each side (until medium-rare) then set them aside in a warm place, allowing them to rest for five minutes.

4. Divide the slaw between four plates. Arrange two cooked lamb chops on top of each, with the bones facing up and to the center of the dish. Drizzle extra dressing over the top and serve.

About Us Products Recipes